An approach where the pilot receives only lateral information is called a "Non-precision Approach". This approach is flow as "Constant Angle Precision Approach" CANPA, to make it similar to execution of an ILS approach.
The CANPA is flown either as a DME-approach or as a Timed approach, with a pre-determined, constant angle of descent to a published MDA "Minimum Descent Altitude". If "contact" at the MDA, a landing can be made; if "no contact" at MDA, an immediate go-around shall be carried out.

VOR and LOC
A VOR approach is based on a VOR placed somewhere close to the runway. The inbound track will not be the same as the ILS Localizer to the same runway. Sometimes the inbound course will differ quite a lot. At ENEV in the northern Norway it is 24º. This will result in high minima.
A LOC approach is based on an ILS, but without GP.
Both approaches are carried out in the same way.

The ATC will normally give radar vectoring to an intercept heading of 30º to the VOR inbound course. In case there is no radar available, the initial approach will be a procedure turn or DME/ARC.

To the left is a table showing the different advisory altitudes that will give the 3.2º decent.
D5 is underlined and that indicates a "HARD LEVEL". This is the lowest altitude at that point.

GS/KT is the GROUND SPEED in knots and ROD is the corresponding Rate OF Descend. 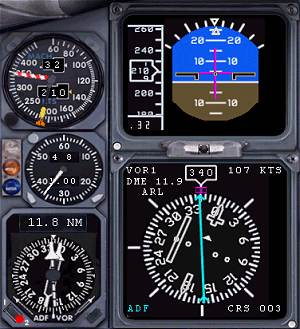 Time to reduce speed and prepare for the descend. It is important to reduce the speed and have the A/C in landing configuration before reaching DME 8. This will greatly reduce the workload and the estimated vertical speed will be more accurate. 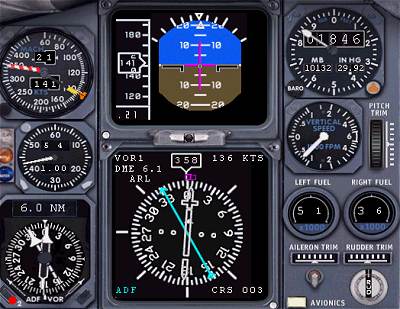 The same setup of the A/P.
Some wind from the left.
Heading is 358º and ground speed 136kts.
The ADF needle is beginning to turn towards the left, you are approaching the outer marker OHT.
Be aware of the "hard level" at DME 5.

The vertical speed of 800ft is the basic one. The wind might change during the descend. In case you are getting low, reduce to 700ft VS and check at the next DME indication. Of course the other way of you are getting high on the profile. 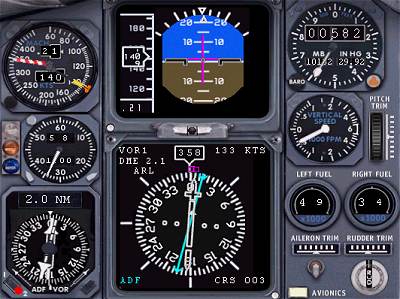 Everything under control??
You have the runway or approach light in sight??
Then - disconnect the A/P and make the rest on your own. No autoland possible in this kind of approach. The A/T may of course still be used all the way down.

You will have the runway to your right, partly due to the inbound course but also due to the crab. Your heading is 358º and the RWY is 007º.
* Turkish Virtual Education Department.
We Appreciate ''SCANDINAVIAN VA'' for Sharing Their Training Documents with Us