Next How to get Connected
Previous Holding Patterns

Speed Limitations: When you're above 6,000' MSL and at or below 14,000' MSL, you're limited to 230 KIAS in a holding pattern - unless you receive an exception from ATC. The aircraft should be at or below the maximum speed prior to initially crossing the holding fix to avoid exiting the protected airspace. Pilots unable to comply with the maximum airspeed restriction should notify ATC. Holding patterns at USAF airfields only - 310 KIAS maximum, unless otherwise depicted. Standard limitations for Speed, Rate of turn and Timing (Holding) Enter and fly holding pattern at or below given (Standard) IAS. Non-standard (i.e. lower) maximum holding speeds are published on the relevant charts. WS The levels tabulated represent 'altitudes' or corresponding 'flight levels' depending upon the altimeter setting in use. Advise ATC if assigned speed is conflicting with: - Prescribed maximum. - Minimum safe airspeed for any particular operation. A limiting DME distance or VOR radial overrides an outbound timing. ICAO PANS-OPS: 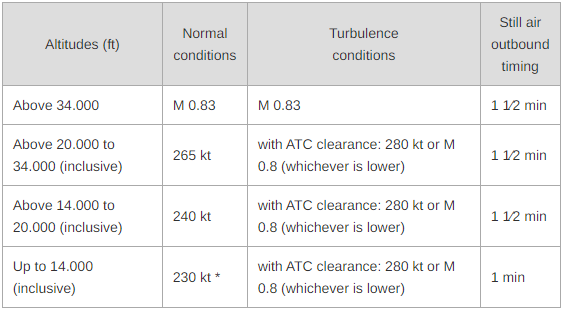 * 170 kt for holdings limited to CAT A/B aircraft only. All turns are to be made at a bank angle of 25 or at a rate of 3 per second, whichever requires the lesser bank. Outbound timing begins over or abeam the fix whichever occurs later. If the abeam position cannot be determined, start timing when turn to outbound is completed. Make allowance for known wind by applying corrections both to heading and timing during entry and while flying in the holding pattern.


Next How to get Connected
Previous Holding Patterns